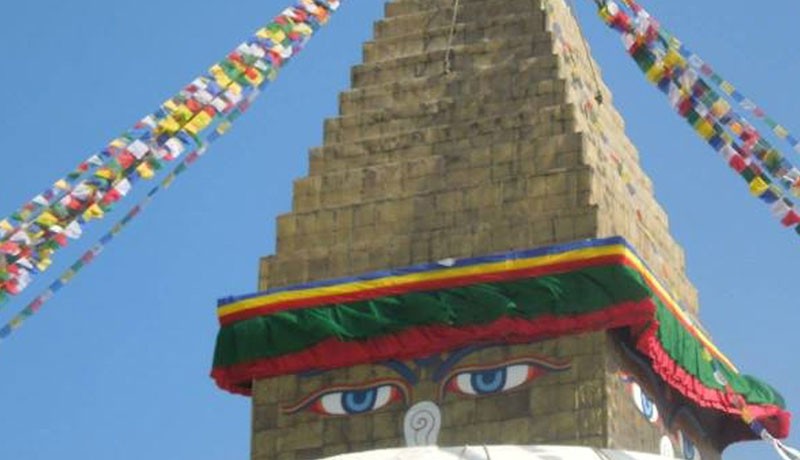 About Buddhist Cultural Tour in Nepal

This tour includes visits to UNESCO World Heritage Sites in Kathmandu valley and to explore Buddhist religious sites in its periphery along with a visit to the birthplace of Lord Buddha, the light of Asia.

Kathmandu Arrival Arrive in Kathmandu Airport where you will be welcomed by the representative from Adventure Bound (P) Ltd who will drive you to the Hotel that you are staying in.

Boudhanath Stupa, one of the largest stupas in the world and an important Buddhist pilgrimage. The unique octagonal Mandala design with hundreds of prayer wheels and the 108 images of the Buddha set into the niches around the huge structure. The area of Boudhnath is also famous for over 50 Tibetan Gompas or monasteries, the also being known as the 'Little Tibet'. The Kapan Monastery at Kapan Hill, a few kilometers higher north from Boudhanath is also known as Nepal Bouddhist Mahayan Centre. Kapan Monastery follows Gelug tradition of Tibetan Mahayana Buddhism under the guidance of Lama Zopa Rinpoche. There is also a nunnery nearby the main monastery, known as the Khachoe Ghakyil Ling Nunnery, home to about 400 nuns. Overnight at Kathmandu.

Drive to Swoyambhu Stupa in the morning, which is one of the oldest Buddhist monuments in the world with more than 2000 years of history and also a major Buddhist pilgrimmage. According to legend, the civilization of Kathmandu Vallley itself begins with Swoyambhu, which literally means "the self-existent." It is said that Bodhisattva Manjusri came across a beautiful lake while traveling and saw a lotus, with thousand golden petals, diamonds pistils, ruby anthers, and lapis lazuli stalk. The legend also says that the lotus seed was planted on a full moon night by Bipaswi Buddha himself. In the course of time, Santikarcarya, the king who turned into a Bhikchu or a monk, raised the first stupa on the holy site. After visiting Swayambhunath, make a 5-6 hour drive to Pokhara. Overnight at Pokhara.

Today we visit some Buddhist landmarks in Pokhara and also enjoy the nature's majesty. The massive Buddhist stupa of World Peace Pagoda was constructed by Buddhist monks from the Japanese Nipponzan Myohji organisation on a narrow ridge high above Phewa Tal. Besides being a cultural monument, the site is also famous for the panoramic view it offers of the Pokhara Valley. We cross the Phewa Lake on a boat and then hike to the Stupa. Then we will visit the Malepatan Gomba or monastery at Malepatan. Then we make another hike to Hyangja, the site for Tibetan refugee camp who fled Tibet after the Cultural Revolution in China. You may try the Tibetan variety of foods, bargain for curios, and at the same time acquaint yourself with the Tibetan culture. There is the Tashi Palkhiel monastery in the tradition of Karma Kagyu tradition. Overnight at Pokhara.

Drive to Lumbini today - about 290 kilometers south-west from Pokhara which takes for about 6-7 hours. We bid goodbye to the Himalayas in Pokhara, and head toward a more flat lands of Nepal's Terai. Generally, the weather gets hot and humid in the plains except in the winter. Perhaps, Lumbini is the most important Buddhist pilgrimage site - the place where Buddha was born. Overnight at Lumbini.

Day 6:Sightseeing of Lumbini and Kapilavastu.

Lumbini, enlisted within the list of UNESCO World Heritage Sites, holds immense archaeological and religious importance. It comprises of ruins of ancient monasteries, a sacred Bodhi Tree, an ancient bathing pond, the Ashok Pillar (erected by Emperor Ashoka in 249 BC on the spot of Buddha’s birth which also bears the oldest inscription of Nepal) and the Maya Devi temple. Maya Devi temple is the spiritual heart of Lumbini which marks the spot where Queen Maya Devi gave birth to Siddhartha Gautam.You also visit the museum, peace pagoda and spend your day exploring the area and its temples, monuments and ancient sites soaking up the serene ambience. From Lumbani drive about 29km west there is Tilaurakot, the historical site of Kapilavastu, where Siddhartha Gautam spent the first 29 years of his life. The site sits in a peaceful meadow on the banks of the Banganga River. The showy shrine nearby with several carved pachyderms is dedicated to Maya Devi. There’s a small museum at the final turn-off to Tilaurakot that displays some of the artefacts found at the site. After you’ve visited the place, you drive back to Lumbini. Overnight in Lumbini.

Day 7:Drive back to Kathmandu.

Drive from Lumbini to Kathmandu about 300 kilometers journey into the winding mountain road. The journey would take for about 7-8 hours. Upon arrival in Kathmandu, you will be transferred to your hotel. Evening farewell dinner Overnight at Kathmandu Hotel.

Depart home on the final day, drive to the airport to catch the international flight. In case if you have late flight you can tour around Kathmandu Durbar square, shopping souvenirs to your friends and family before you fly back to home or use the day as you please