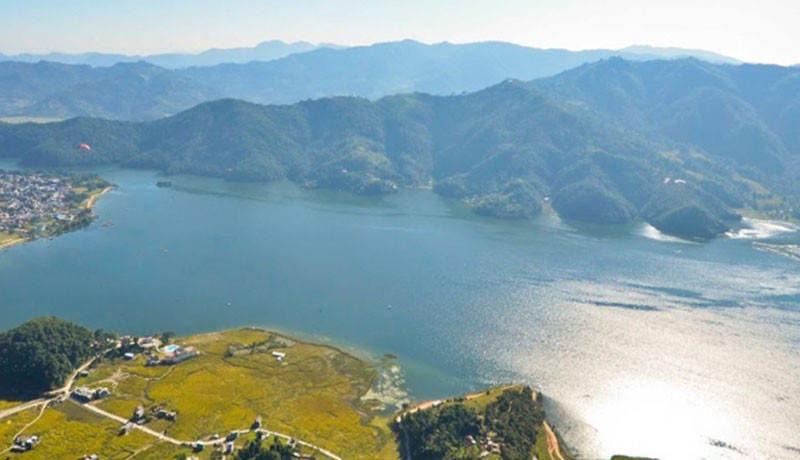 Pokhara is known as queen city of Nepal, it’s one of the cleanest cities of the country. It’s famous because of splendor Mountain View and the beautiful lakes around the city. Residing in the lap of the great Annapurna massif, Pokhara valley offers the most spectacular views of the Annapurna panorama including fishtail. Apart from the mountain views and lakes, the lush in the environment is so powerful that it can easily bring peace and joy within your heart.
Pokhara city can be a perfect outing destination in Nepal as it has so much to offer. Adventure Bound proudly announces the wonder especially designed Pokhara Day Tour package to enable you to experience the major highlights of Pokhara within a day.

In this limited time, Pokhara Day Tour covers the major destinations in Pokhara including fewa lake boating, David falls, International mountain museum and more which are described in  details as below;

Phewa Lake
when we talk of Pokhara the first thing that comes in our mind is Fewa Lake. Fewa Lake is the second largest lake in Nepal that adds to the beauty to Pokhara city. The wooden boats at the lake with the endless book shops, lodges and restaurants along the lakeside make the whole environment vivid and vibrant. At the middle of the lake stands the famous Barahi temple. In this lake, you can engage yourself in various activities like boating, sailing, bird watching, fishing, etc. The reflection of the Fishtail Mountain in the crystal clear and serene water of Phewa Lake is something not to be missed.

Davids fall
Davids fall in a scenic water fall which lies about 2km south west of Pokhara city. It was named after a foreigner David who was swept into an underground passage beneath the fall while swimming in the Pardi Khola. This is something that you would love to see while you are in Pokhara.

International mountain museum
International mountain museum is a popular museum which is serving from Pokhara city. The shape of the museum roof itself resembles the mountain skyline which is a unique feature of this museum. This museum maintains a systematic record of all the successful eight thousand, geographic flora and fauna and all the major human activities in the range.

These itineraries are prearranged by their popularity with our previous guests but can easily be customized to accommodate your own schedule and desire.

“Best tour while we were in Nepal”

We were in a family tour for seven days and got the opportunity to know Rajan and his company Adventure Bound treks and tours. They made our day to day itinerary where they included Chitwan trip, Pokhara visit and Kathmandu sight seen including Everest flight. All arrangement was the best. There were no complaining on the accommodation they booked for us, the vehicle to drive us around and other services.We were very happy that we chose Adventure Bound for our travel arrangement. They took care of us in every step while we were there for our holiday. I have no hesitation recommending Adventure Bound and Rajan who surely could organize best trip for you for your Nepal holidays.

Adventure Bound organized our entire trip to Nepal. We visited Kathmandu and spent amazing days at Pokhara.The entire trip was organized by the Rajan Pandit. He is an excellent guide and companion.He recommended amazing places to see but we didn't have much time.Rajan is fluent in English, He is a gentle and gracious young man with a very positive attitude and a good sense of humor.We visited Nepal in Nov. and we really enjoyed the weather ( the degree was 21 C ) sunny all the time.Visited November 2013