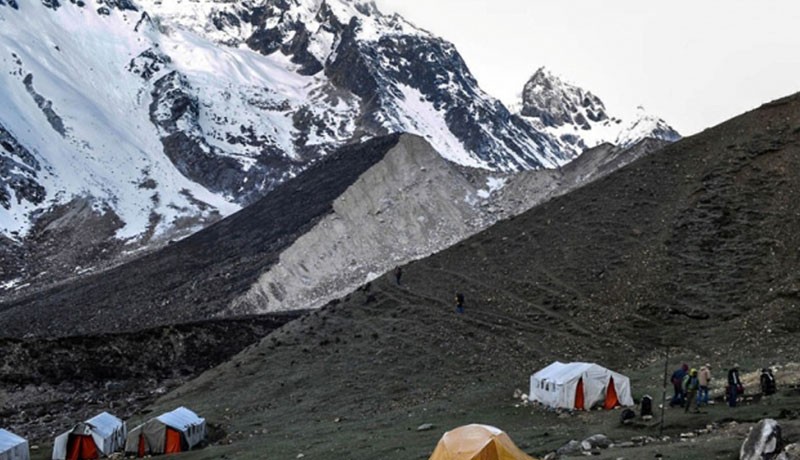 While the Manaslu Circuit has become the new darling of the Nepal trekking world, offering a classic Himalayan trek without any of the overcrowding of the Everest or Annapurna regions, trekkers dont always make time for adding the route in and out of the remote Tsum Valley as part of their itinerary, which is a big mistake, as the wild Tsum is one of Nepals most unique hideaways and one of its best kept secrets.

Branching off from the normal Manaslu Circuit route on the third day of walking, the trail up to the wild Tsum traces a raging river up a steep valley to the Tibetan border, following trails which are part of an age-old traditional yak route, carrying goods between Tibetan traders in the Tsum and Tibet. Only open to foreigners since 2008, the valley is inhabited by Tsumba Tibetans, agriculturalists whose religion forbids them from hunting, meaning that the Tsum is rich in wildlife, with the greatest populations of bharal (Himalayan blue sheep), Himalayan tahr, and snow leopards to be found in Nepal.

The path into the upper Tsum is lush and forested, climbing steeply up and down above the frothing Siyar River. Villages here are surrounded by abundant fields of amaranth, barley, and millet, the primary crops growing on the mountain slopes, with fields extremely colourful during the fall harvest season. Its easy to see why Padmasambhava, an 8th century Buddhist master also known as Guru Rinpoche, blessed this area, naming it as a beyul, or hidden secret valley, only open to those of pure heart and mind. According to tradition, beyuls tend to be cut off from the rest of the world, and resemble a Shangri-La, reachable only by pilgrims who make the effort to reach them.

Monasteries and nunneries are an integral part of the Tsum,.and the captivating Mu Gom-pa,, perched on a hill at 4,000 metres, is one of the highlights of the trek. Established by a lama in 1936, the monastery overlooks high passes leading into Tibet, as well as the entire Tsum Valley below, with Himalayan giants Himchuli and Gauri Shankar looming high up over the forests and valley folds in the distance.

Half a dozen monks still inhabit Mu Gompa, spending their days meditating, chanting, and blowing traditional conch horns before conducting puja blessing ceremonies, and an overnight here is not only a memorable, other-worldly cultural experience, but an excellent aid in the acclimatisation process which lies ahead, with the crossing of the Larkya La Pass.

Once back down the Tsum, youll rejoin the Budhi Gandaki River and head up into the high country, where the lush landscape is replaced by dry pine forests, and shortly after-wards, by rock and ice. This is the high Buddhist alpine world, where ancient stone chor-tens and mani walls with Sanskrit mantras engraved into stones mark the entrance to each village. Samagaon, at 3,600 metres, is the largest of the villages here, and as it is a staging point for alpinists coming to climb Manaslu, it has some of the best lodges of the entire trek, and is also the place where you can take a day off to acclimatise for the final push over the Larkya La, as well as to make the day hike up to Manaslu Basecamp, which at 4,600 metres is one of the most stunning high altitude day hikes one can make in the Himalayas that doesnt require any mountaineering equipment or experience.

From Samagaon, the trail continues to rise, and past Samdo, the next village some three hours up the valley, all signs of human habitation disappear. It is a stark and barren world of large boulders, freezing weather, and walls of ice looming up above everything. The only settlement here is Dharmsala, the last place of refuge before the pass. There are no trekking lodges here nor is Dharmsala an inhabited village, but there is a makeshift tent camp set up here for trekkers, with tents equipped with mattresses lined up in rows, as well as an elongated dining hut to feed the hungry. Sleep doesnt come easy here, as it is cold and high, and most trekkers set out to cross the Larkya La at 3-4 in the morning, to avoid the winds that plague the pass and increase as the sun rises.

The hardships here are all worthwhile though, as the final push up to the Larkya La awards you with endless views of high snowy peaks, with vistas looking out into Tibet as well as into the Annapurnas. The village of Bimthang on the other side of the pass, is set in a stunning valley, with views up the backside of Manaslu, and comfortable places to rest in after the long day. From here, its just another few days down to the end of the circuit, from where you meet the Annapurna Circuit trail, where you can continue your adventure, or else meet your jeep for transport back to Besi Sahar and the main highway to Kathmandu.

The above itinerary is the standard itinerary which can be modified according to your time and need. Please feel free to contact us in any queries you have regarding this trek.

We need a day for the trek preparation. Please note that you need to be in Kathmandu at least one day in advance as we could only issue the special permit while we have your Original passport.

The preparations went smoothly. I was picked up by my guide Robin from the airport. After collecting additional gear, i went to sleep. The next morning we flew to Lukla and started our trekking. Al guesthouses were nice and the food was good. Finally we reached the top of the Gokio Ri. Beautiful. I wil never forget! Back in Lukla, we had to wait two days, because of bad weather. Adventure Bound and Robin have done everything to get us down as soon as the weather permitted. I really would recomment you to go with Adventure Bound. Good organisation and very good guides.

The preparations went smoothly. I was picked up by my guide Robin from the airport. After collecting additional gear, i went to sleep. The next morning we flew to Lukla and started our trekking. Al guesthouses were nice and the food was good. Finally we reached the top of the Gokio Ri. Beautiful. I wil never forget! Back in Lukla, we had to wait two days, because of bad weather. Adventure Bound and Robin have done everything to get us down as soon as the weather permitted. I really would recomment you to go with Adventure Bound. Good organisation and very good guides.