Langtang Gosainkunda Trek is a combination of remote Langtang Valley and the high magnificent mountains, glaciers, and lakes at Gosaikunda. The trek is just 140 kilometres north from Kathmandu and is accessible to everyone. Langtang Gosaikunda Trek is mostly popular for the scenery it offers to give you a chance to explore the hospitality and ethnic culture of the people living in the Langtang region.

Discovering the Tibetan culture, you will feel yourself surrounded by different monasteries, Tamang villages, and Tibetan mountains. One of the major attractions of the Langtang Gosaikunda trek is visiting the Langtang National Park. It is the place where you will get to explore a great variety of wild flora and fauna. Walking along the rhododendron forest along with the magnificent views of Langtang Himalayas, you will have a wonderful trekking experience.

The route to Gosaikunda lake is beautiful and adventurous. The lake Gosaikunda sits at an altitude of 4360 meters which is surrounded by mountains on all sides. The lake is visited by thousands of devotees during the full moon of May and August. Walking along the Gosaikunda lakes and viewing sunrise and sunset over the mountains from Gosaikunda is a unique and breathtaking moment you will ever have. 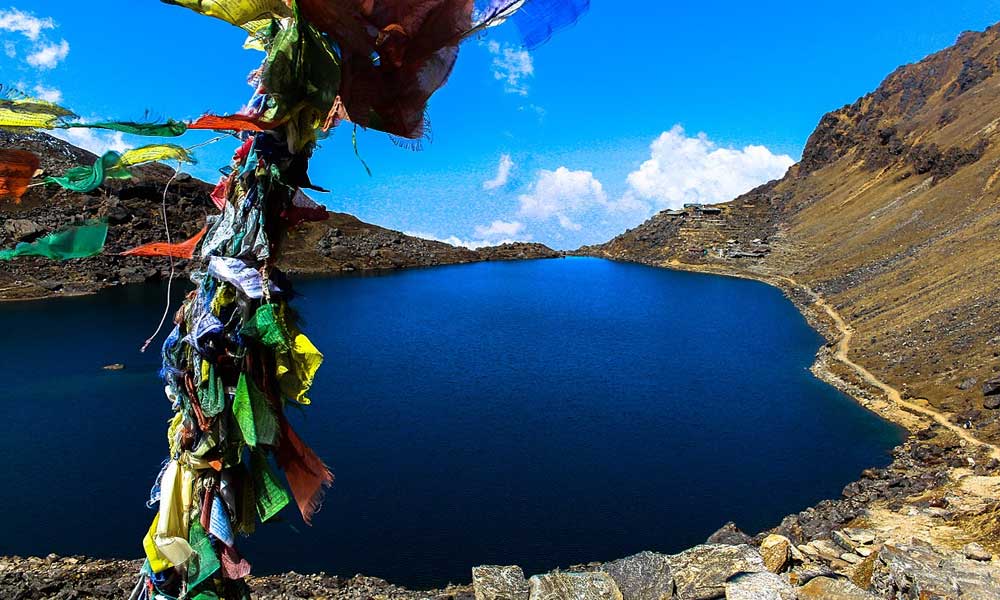 Day 01: Arrival at Kathmandu Airport and transfer to the hotel.

Day 14: Trek to Sundarijal and drive Back to Kathmandu.

Day 15: Depart to your next destination.

Spring is the pre-monsoon period in Nepal that comes after the winter season. It is the time nature regenerates its lost beauty. During Spring, the natural beauty of Langtang reaches to its maximum. You will see various new plants and trees growing along the way to Langtang Gosainkunda trek.

During Spring the weather of Langtang region becomes fresh and clear. You will have great visibility of the mountain ranges along the trails. It is the time when the national flower of Nepal, Rhododendron blooms. You can smell its fresh fragrance as you are walking.

Overall, Spring has been Trekkers favourite from all around the world. The daytime temperature of Langtang Gosaikunda ranges between 10-20 degrees during Spring. It offers you with suitable weather for trekking. However, you might expect some rainfall during late May. So, be prepared for it as well.

During Autumn, the daytime temperature ranges between 10-15 degrees in the Langtang region. The weather is quite bearable and suitable for trekking. Autumn is also the time of festivals in Nepal. So, it is also known as the festive season. The major festivals of Nepal such as Dashain and Tihar fall during this month. So, you can engage yourself at such festivals if you want to.

Autumn provides you with clear skies and clearer views of the mountain ranges and overall scenic beauty. During this time, you may expect of rainfall. During early September, you can see yourself getting wet in the rain. So, be prepared with all the required trekking gear. 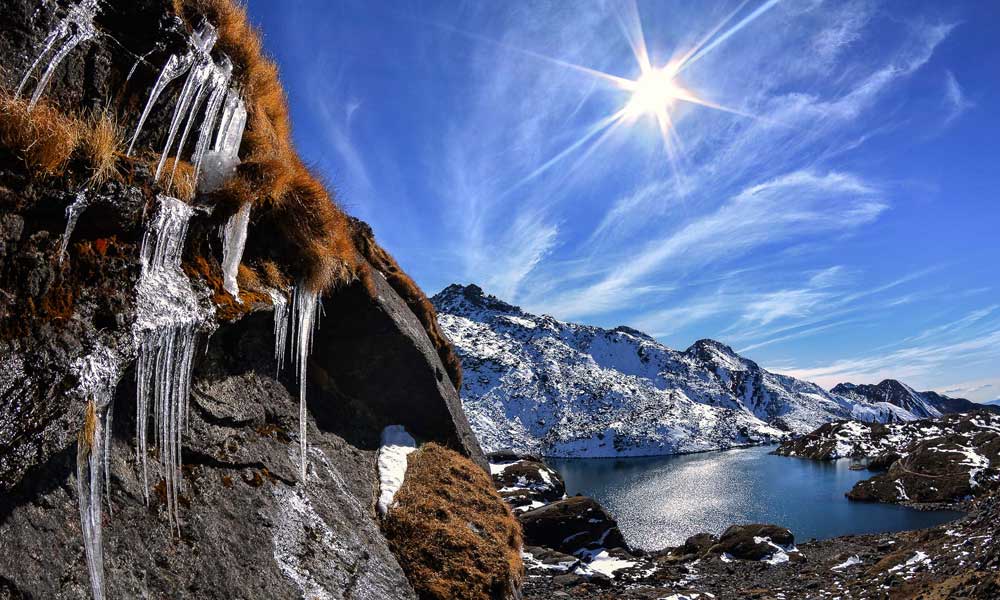 Offseason trek is the least preferred time when it comes to trekking. There are many pros and cons of trekking during off seasons. Winter and Monsoon are generally some of the times where you will notice only a few numbers of trekkers in the trails.

However, Langtang Gosainkunda Trek is doable in all season with appropriate trekking gears.

Winter falls in the month of December, January, and February in Nepal. The reason behind a smaller number of trekkers in winter is because of the extreme cold weather and temperature of the Langtang region. During winter, the daytime temperature of Langtang ranges between 2-6 degrees. The nighttime temperature might even fall to minus degrees.

From late January onwards, the region faces snowfall in the higher elevations. Walking along the snow-clad mountains will be exciting and adventurous. Winter trek is best suitable for the ones who want to have a peaceful trekking experience.

The reason monsoon hasn’t gained a lot of popularity like Spring and Autumn is because of the frequent rainfall the season showers. Rains tend to make the trekking trails wet and slippery. However, the mornings after rainfall look beautiful than ever. The skies become clear and you will be surrounded by greenery all around. So, trekking to Langtang Gosainkunda during monsoon can be an option if you carry appropriate trekking gears with you. 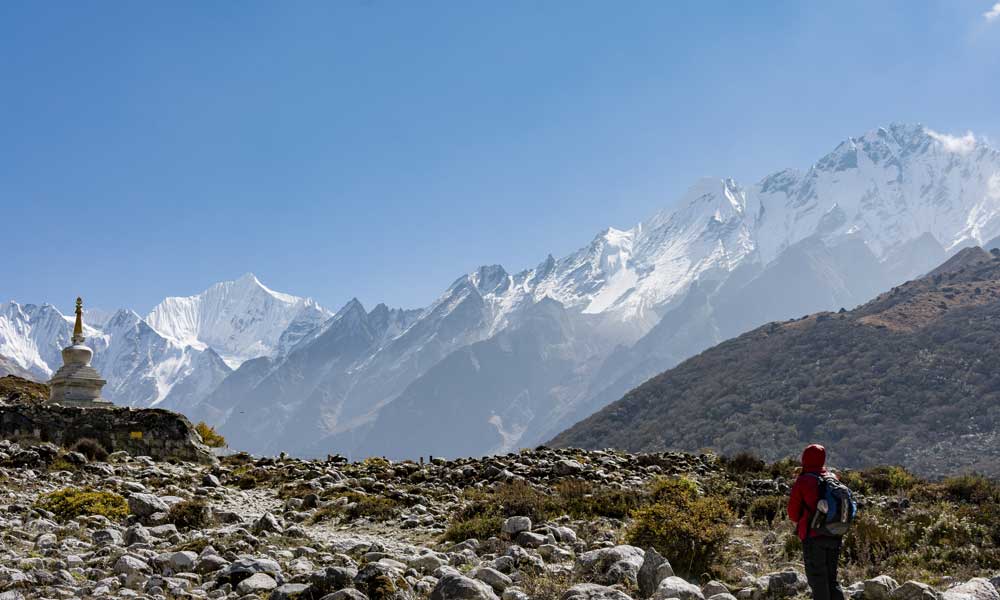 Langtang Gosaikunda Trek is a moderate level trekking destination in Nepal whose difficulty level depends upon various factors. Such factors include the weather and temperature of the trek, experienced or beginner trekker, duration and altitude of the trek, etc.

Distance and Duration of Trek

Langtang Gosaikunda Trek is about 117 kilometres and you will have to walk around 35 kilometres through bumpy roads from Trisuli to Dhunche. You will be walking through uphills and downhills starting your trek from 2000 meters at Dunche and reaching up to the height of 4380 meters at Gosaikunda.

In your Langtang Gosaikunda Trek, you will have to walk for around 6-7 hours a day. Walking continuously for such hours may be very tiring and causes a lot of pressure on your feet. But this trek may not be tough as it does not require any ice climbing and physical climbing.

The highest point of Langtang Gosaikunda trek is at 4380 meters at Gosaikunda. Altitude sickness is a common problem when you trek above the height of 3000 meters. When you trek to a higher altitude, the amount of oxygen present in the air becomes comparatively less which will cause you difficulty in breathing. Some of the symptoms of Altitude Sickness are headache, fever, nausea, and vomiting. If you find yourself getting into any such problems, you should immediately descend to a lower height.

Trekking to Langtang Gosaikunda during winter and monsoon becomes quite challenging. Walking along the trails covered snow might be quite tricky especially if you are a beginner. Likewise, during monsoon, you will have to walk through the muddy trails where you will have a high chance of slipping if you do not tread carefully.

So, for a beginner as well as an experienced trekker, it is better to be physically and mentally prepared. Start preparing for some physical exercises three weeks before your trek. You can engage in activities such as swimming, running or cycling.

Langtang Gosaikunda Trek with or Without a Guide

But it is always better to have someone assisting you throughout your trek and someone who has a knowledge of Nepali language. Hiring a guide is an advantage as you can always have someone who will be there during emergencies. They will even help you to find the best hotels and lodges for your comfortable stay.

You will find a lot of benefits of hiring a porter too. A porter will carry baggage for you which will make you very easier while trekking. You will not have a lot of pressure on your back and you can walk comfortably without getting tired.

So, if you quite a friendly budget, you can always hire both the guide and porter while trekking. Guides will cost you around 20-25 dollars a day whereas porter will charge you 10-15 dollars a day. The choice is yours if you want to trek independently or with the help of a guide. 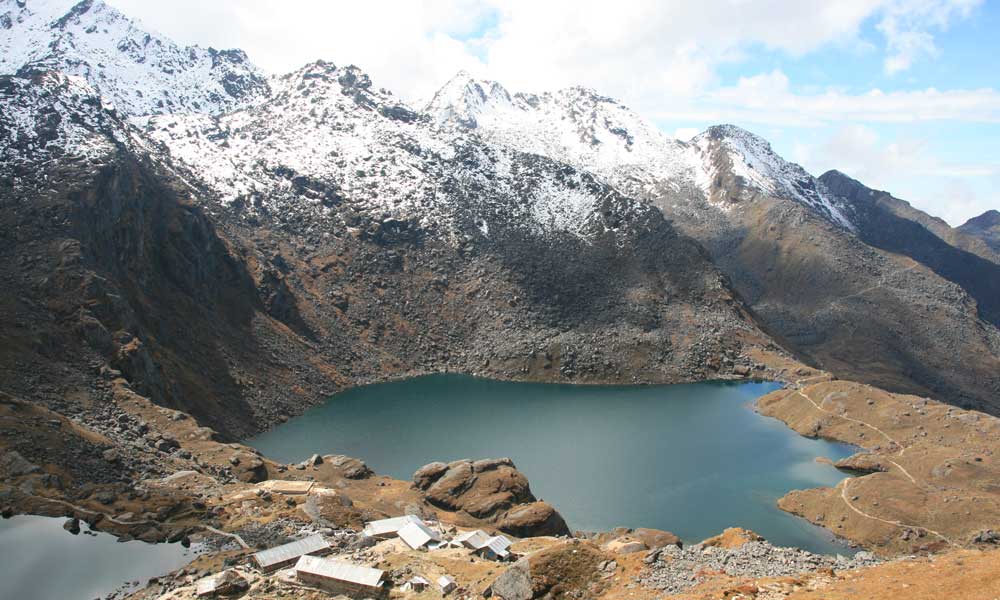 Some of the highlights of Langtang Gosaikunda Lake are Laurebina La Pass, Kyanjin Gompa and Langtang village. You will get a chance to witness some of the most significant mountain ranges such as Langtang range, Tibetan range, Mansiri range, Ganesh Himal, Mount Manaslu and many others. You will have a great view of Gonzalez Kunda lake which is one of the holy lakes in Nepal that sits in Langtang National Park itself.

Langtang Gosaikunda Helicopter Tour will take you around 90 minutes to complete the whole tour. Within this short period, you will get a chance to explore the beauty Langtang region holds. This scenic helicopter tour to Langtang Gosaikunda will give you a lifetime of experience.

Langtang Gosaikunda may not be as popular as Everest and Annapurna region trekking but it has gained a lot of popularity and will give you one of the best ways to explore the Himalayas. Langtang region consists of a lot of attractions that deserve our attention. You do not have to worry about the difficulties you might face. Challenges will only make your trip even more exciting. Along with this, by following specific tips and tricks such as carrying appropriate trekking gears, strolling, hydrating, engaging in physical exercises etc. will help you to make your trek less difficult.

Adventure Bound Nepal is a travel company and will provide you with high-quality services. You can view the detailed itinerary of you Langtang Gosaikunda Trek on our official website. We can arrange your trip according to your choice as well. Feel free to Contact Us at Adventure Bound Nepal if you have any questions.